The Lhasa Apso a little dog, longer than it’s tall. Although the breed has never been used for purposes requiring great athleticism, the breed nonetheless has strong loin and well-developed quarters and thighs. the head is well covered with a good fall over the eyes, with whiskers and beard, imparting a dignified, almost lion-like look. The bite should be either level or slightly undershot. The coat is heavy, straight, long, and hard.

The Lhasa apso dog breed is originally from Tibet, where he was a highly regarded watchdog within the palaces and monasteries of his mountainous homeland. Today’s Lhasa is not any longer a palace guard but primarily a family companion who loyally protects his family from danger. Though small in stature, the Lhasa may be a sturdy and independent dog.

The Lhasa originated in Tibet within the Himalayan Mountains many years ago. It’s named after the sacred city of Lhasa. For years the breed remained solely bred in Tibet by holy men and nobles. it had been used as a watchdog in temples and monasteries. The dog was considered sacred. the assumption was that when its master died the master’s soul entered the Lhasa Apso’s body.

The breed wasn’t easy to come across and was hard to buy. The dogs were considered good luck to their owners. In 1933 the dogs spread to other parts of the world because of C. Suydam Cutting, who introduced the first Lhasas to the USA as gifts from the 13th Dalai Lama. Tibet’s ruler would present them to visiting foreign diplomats. The Lhasa apso first appeared in Britain within the 1920s and within the USA in 1930. it had been first recognized by the AKC in 1935. 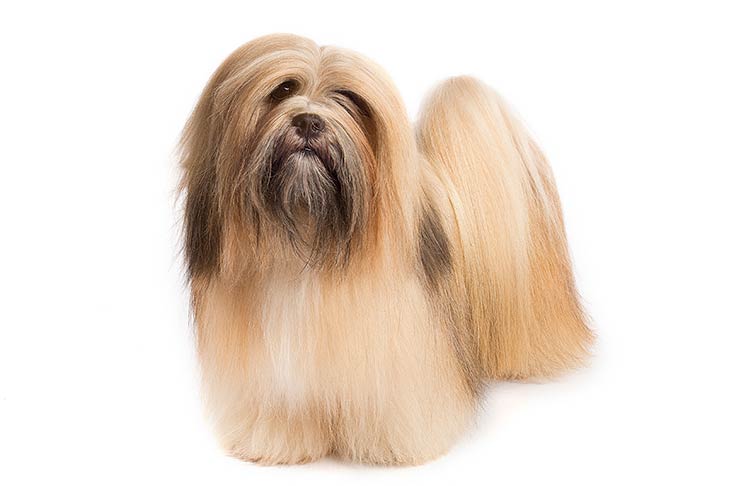 The Lhasa is usually a robust, healthy dog. the most serious health problem within the breed is hereditary kidney dysfunction, which may be present in mild to the severe form. there’s no reliable test to detect carriers. Prospective owners should seek out experienced, conscientious breeders who are conscious of the condition and take away affected individuals from their breeding programs. Breeders have made great progress toward eliminating this problem, and also the risk of acquiring an afflicted puppy from a knowledgeable breeder is slim. Other conditions to inquire about are dry eye, progressive retinal atrophy (PRA), slipping stifles, hip dysplasia, and cherry eye.

Lhasa Apsos thrive on high-quality food. Since they typically have thick skin to support their heavy hair coat, Lhasas need a diet with good protein and fat levels. Breeders recommend food with a fat level above 14 percent. The protein source (meat, fish, game, etc.) depends on the individual dog’s tolerance and taste. Most Lhasas tend to utilize their food alright, and even slight overfeeding can lead to unpleasant digestive outcomes. Food is often fed dry, or slightly moistened with a touch flavor enhancement like cooked meat or grain-free canned food. Whether to feed once or twice each day may be a personal choice for owners, but dogs thrive on consistency, so it’s recommended to keep the frequency and time of day constant.

How to Take Care of Lhasa Apso Dog:

The Lhasa may be a great choice for people with limited space. He’s well suited for apartment or condo living, though he does enjoy playing outside in a fenced yard.

The Lhasa is content with several short walks each day. he is not a high-energy dog, and he doesn’t tend to bounce off the walls when cooped upon a period. He’s happy sitting in your lap, wandering around the house, playing with his toys, and alerting you to passersby.

Housetraining the Lhasa is often challenging, so it’s wise to crate train. Also, remember that this dog will likely take an extended time to mature mentally. He may reach full size at one year of age, but his behavior will still be quite puppyish. Be especially patient during training — keep it positive and consistent, and be willing to go the long run.

The Lhasa apso does require frequent bathing and grooming. This mischievous Tibetan breed is often bathed and groomed as frequently as once every week up to every 6 weeks depending on the activity level of the dog and also the length of coat. The Lhasa Apso’s coat is thick and dense, therefore is does mat and tangle easily. it’s essential to pick the right products to match the pet’s needs to permit the Lhasa apso to possess an enjoyable grooming experience and maintain healthy skin and coat.

There is an art to bathing the Lhasa apso to minimize further tangling during the bathing process. After the coat is wet, apply the shampoo by squeezing it through the coat in a downward motion. this will even be achieved using a rubber curry with cylinder type teeth to assist penetrate right down to skin and thoroughly clean the whole coat.

The same technique is used when conditioning the coat. ensure you thoroughly rinse the coat. it’s a good idea to slightly cool the water temperature down for the final rinse to make sure the coat is free of any product. Once the bath is finished, blot the coat with a towel and squeeze excess water from the ears, legs, and tail. Always use a downward motion to get rid of the excess rather than a circular motion to keep the coat from further tangling.

Finally, it’s time to dry the Lhasa. If the dog is in full coat, it’s best to get the dog on its side and dry in layers or line dry the coat. make certain to completely dry the world you’re performing on before moving onto the subsequent area. Pay particular attention to the insides of the legs and behind the ears.

The Lhasa is usually not an idler and is adept at self-exercise. they’re going to race around an apartment to run off energy, entertain themselves during a fenced yard, or take their owners on a brisk walk. Mental stimulation is as important as physical exercise. They excel at agility, can do scent work, and are known to retrieve and herd. There are talented Lhasas certified as therapy dogs working in hospitals, nursing homes, colleges, and prisons.

It should be remembered at all times that the Lhasa was bred as a guard dog also as a companion dog. These dogs are often aloof with strangers, although they’re affectionate with people who they know and trust. The sharp alarm bark can become a nuisance if the dog isn’t guided on when it’s appropriate.

Lhasa Apsos are dogs that do best with a good amount of socialization and plenty of human company. they’re not always good with other dogs so that they should be socialized to dogs and other pets also as people right from puppyhood. Some Lhasa Apsos have a suspicious nature and maybe snippy. at home with family and friends, however, they’re lively and maybe almost silly.

Lhasa Apsos will please you if it pleases them to please you. they’re extremely smart, sometimes compared to a willful toddler. they will learn almost anything that a trainer makes interesting enough to master—on their terms. they are doing not appreciate repetitive drills and may become uncommonly stubborn if bullied or badgered. Most cases of unacceptable Lhasa behavior involve situations with inconsistent, improper, or nonexistent human leadership. this is often a breed for creative, motivated people that enjoy a canine companion of like mind.

The Lhasa thinks he’s an outsized dog, a very large dog. Bred for many years to be a royal watchdog, the fashionable Lhasa approaches life the way his forebears did: he’s a loyal guardian of home and family. The Lhasa’s protective nature can surprise those unfamiliar with him, given his small size and long, flowing coat. He certainly doesn’t appear fierce.

But when it comes to protecting his own, the Lhasa is fierce, though never unusually aggressive. He’s naturally suspicious of strangers — an excellent trait for a palace guard — and he takes his job as protector seriously. The lionhearted Lhasa’s devotion also means he enjoys sharing life together with his family. He’s intelligent, independent (a watchdog must think on his own), and mischievous.

If you’re considering a Lhasa — and lots of find his looks irresistible — you want to consider this breed’s protective nature. Early socialization and training are absolutely critical to a Lhasa’s success as a loved one, in order that he can properly direct his natural tendency toward wariness. The time invested in training him, however, is well worth your effort in terms of the loyalty, joy, and companionship that this long-lived, hardy little dog provides.

The Lhasa likes doing his own thing, which suggests his goal in life isn’t necessarily to please you. during this, he differs from such breeds as the biddable Labrador retriever. While the Lhasa are often trained successfully, he’s not always the foremost obedient dog within the class.